Having arrived from a distant galaxy through a black hole with the aim of helping the Sakrohm church, high priestess Ahseya initially just went about observing and analyzing the population of Clint City. It was only after having singled out the most determined targets that she got down to the serious business of retrieving their DNA, sometimes by force, and with an even more mysterious aim in mind... Her presence is only equaled by her tyranny. 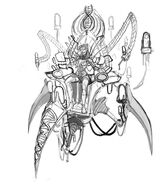 Alternate Level 3
Add a photo to this gallery

Retrieved from "https://urban-rivals.fandom.com/wiki/Ahseya?oldid=67738"
Community content is available under CC-BY-SA unless otherwise noted.