Urban Rivals Wiki
Register
Don't have an account?
Sign In
Advertisement
in: Clans, All Stars, All Stars Females,
and 6 more

The new generation snack "ChocoMuscles", that claims to reduce fat while developing muscles, just arrived in town and everday more and more Clintizens give up sports and start eating it. Stadiums are not taken care of and running tracks become dance floors for the Junkz... Gathered by Eyrton, the best sport professionals of Clint City want to save the city and restore the truth: To gain muscles you have to fight!

The All Stars were released on September 2006. 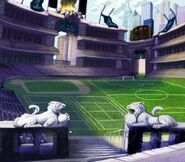 The All Star Stadium.

Another visual of All Stars' Stadium.