The old captain of the Piranas' ship is not much talked about. It has to be said his only legacy are the old wreck Wheeler and Amiral Coco, the parrot. And that damned bird thinks he actually is the old captain, barking out orders ending in “Parasites”, “Iconoclasts” or “Freshwater Swabs”. And more than once the boat has sailed out to sea with Bloodh left stirring a cocktail on the beach. In fact, the only reason he hasn't yet been added to the ship's stewing pot is out of respect for a sacred law from the code of pirates, but believe you me, not everyone's very happy about it!

Amiral Coco has a brief appearance in "A Lucha Libre in Clint City" when Bloodh gets the flier after his minions were defeated. Amiral Coco pretty much acts like a sterotypical pirate's pet parrot. 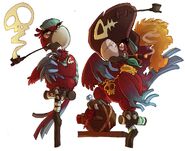