Who really is Andy Ld? Greem herself couldn't say. One winter morning, Caelus Cr entrusted her with the sullen child, offering her little information, apart from muttering, "Keep him hidden and keep him safe". However, Andy Ld knew his power had been sealed in the Seven Stones of Retention by Caelus Cr. The power to animate and change objects using spectral energy is therefore just one of the powers he possesses... 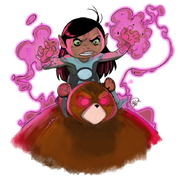 Retrieved from "https://urban-rivals.fandom.com/wiki/Andy_Ld?oldid=69492"
Community content is available under CC-BY-SA unless otherwise noted.