As the academy’s math and physics teacher, Anton must not only deal with students who more often than not know at least as much as him, but who also spend a good deal of their time stopping time or teleporting themselves to the four corners of the universe. It’s certainly a change to his last job at a high school in the city’s Eastern quarter. 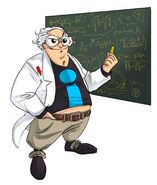 Level 2
Add a photo to this gallery

Retrieved from "https://urban-rivals.fandom.com/wiki/Anton?oldid=52612"
Community content is available under CC-BY-SA unless otherwise noted.