Founded by the venerable Bodenpower, the Bangers gang is made up of fun-loving youngsters who sometimes get a little unruly. This bad reputation, perpetrated by the government-controlled media, makes people cross the street when the Bangers arrive in town. But they're out to change all that - even if they have to beat it into people’s heads!

The Bangers were released on September 17th 2006. 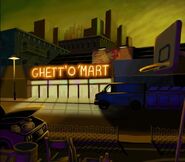 new Bangers clan symbol- painted, graffiti B
Add a photo to this gallery

Retrieved from "https://urban-rivals.fandom.com/wiki/Bangers?oldid=71691"
Community content is available under CC-BY-SA unless otherwise noted.