You have to be careful of relics sold under the counter by obscure antique dealers. While Zoltan was looking for a decoration to inject some fun into his show, he came across a mysterious totem which, according to the salesman, represented the god of three faces, Barbacoatl. From the very first show it was an overwhelming success. The crowd loved the totem! But so much adoration could only serve to awaken the sleeping god starved of compliments. Stealing the show from his owner, Barbacoatl roars and juggles gaily to the great enjoyment of Cassandra. Everything will be fine so long as no one realizes these strange juggling balls represent a string of inept explorers reported missing in Los Santos. 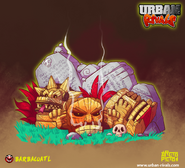 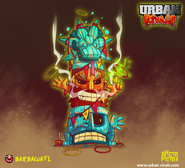 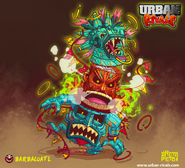 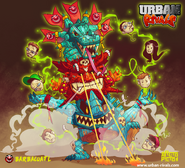 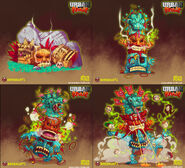 All levels
Add a photo to this gallery
Retrieved from "https://urban-rivals.fandom.com/wiki/Barbacoatl?oldid=62474"
Community content is available under CC-BY-SA unless otherwise noted.