Beeboy was running a center aimed at distancing young people from crime by organizing rap and breakdancing events, for which he was particularly talented. Unfortunately, his center was shut down by the scheming Government who didn't see his deeds in a favorable light. So when Bodenpower extended the hand of friendship to him, he signed up with the Bangers there and then to join them in their fight against the system. 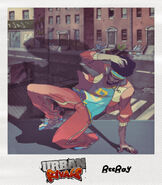