The monastery of the Golden Mountain is a very select institution to which only the very best have access, according to the late Lost Hog Cr's rules. Some occupants of the prestigious establishment come in search of knowledge, technique, enlightenment or even a Bruce Lee collector's edition film. As for Bengal, he left his country for one reason only: to challenge one by one all the masters of the Fang Pi Clang and show them that his Tiger Kick is the most destructive move known to man. Okay, there's nothing particularly original in that, but what else can you expect when all you've been trained to do since birth is destroy banana trees with knee kicks! 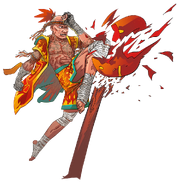 Retrieved from "https://urban-rivals.fandom.com/wiki/Bengal?oldid=69111"
Community content is available under CC-BY-SA unless otherwise noted.