The Sexy Burgers restaurant (a subsidiary of Zlatar corp.) owes its success to one simple recipe: sexy waitresses in very tight uniforms and hamburgers sold at ten times their cost price. To bring down this edifice of machismo, the Pussycats have recruited Brittany who’s landed herself a job there as a waitress and is trying to stir up resistance from within.

LV 2.
Add a photo to this gallery 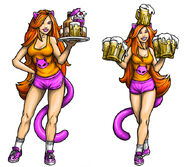 Retrieved from "https://urban-rivals.fandom.com/wiki/Brittany?oldid=65988"
Community content is available under CC-BY-SA unless otherwise noted.