Burdock has just spent many a long month amongst the Junta on a secret mission to master their most up-to-the-minute fighting techniques and arms control. Now back with the Roots, he’s using this new-found expertise to perfect his flower canon, a formidable weapon that fires joy and happiness onto all those it targets.. 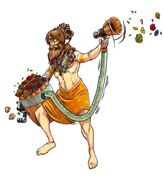 Level 4
Add a photo to this gallery
Retrieved from "https://urban-rivals.fandom.com/wiki/Burdock?oldid=68195"
Community content is available under CC-BY-SA unless otherwise noted.