When she discovered that her big sister Morlha had joined G.H.E.I.S.T., Chloe initially tried to convince her to leave the secret organization but, faced with her sister's obstinacy, she decide to join Sentinel to prevent G.H.E.I.S.T. from achieving its ends. Shortly after she arrived she fell in love with Havok and since then they've been the most dangerous couple in town.

One of the most popular and reoccurring characters in the official webcomic, Chloe has appeared in several of the stories (1st level form). Ironically, she's portrayed as the jealous one in the relationship while the bios on the cards have Havok having the jealous streak. Though she is dedicated and can be pretty nice when she wants to be, her character can be rather hot-headed (see the B-Team saga). 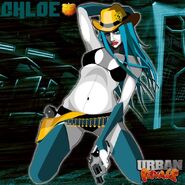 Level 5
Add a photo to this gallery
Retrieved from "https://urban-rivals.fandom.com/wiki/Chloe?oldid=61257"
Community content is available under CC-BY-SA unless otherwise noted.