Chopper had always been different from her fellow creatures. Hunting, reproducing and sleeping all seemed pretty pointless and had the general effect of boring her to tears. But all this changed dramatically when a strange grey thing appeared in the sky only to crash land and burst into flames. Out of it emerged weird and wonderful creatures with loose orange skin. After having hunted one or two of them, Chopper soon realized that these creatures represented more than just a meal, in that they were able to organize themselves and use nature to their advantage, to say nothing of their strange habits. Without a doubt, they were a whole lot more interesting than her fellow creatures. So, she decided to dress herself in the remains of her victims' clothes and go and extend a paw to them. The two clan chiefs quickly spotted she was a fairly unique dinosaur and decided she could be a very useful asset to them. And now she's discovered Clint City, hunting has suddenly become a whole lot more fun! 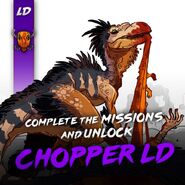 Special background
Add a photo to this gallery
Retrieved from "https://urban-rivals.fandom.com/wiki/Chopper_Ld?oldid=67325"
Community content is available under CC-BY-SA unless otherwise noted.