Rule number one of the Uppers club: never stray into the filthy, peasant-riddled streets without a veil of perfume both under and over one's outfit. This is one easy rule to follow if your name's Christelle and you're heiress to the famous perfume empire, Nana Litchie. With 90% of her person covered in fragrant scents that have even the flies on their hands and knees, she is the uncontested mistress of sweet-smelling perfumes. Christelle will give you the means to hypnotize your sweetheart with her Clintz No5 scent, or turn heads with her new Christelle eau de toilette for the very modest cost of just 150,000 Clintz a 15cl bottle. What a bargain! 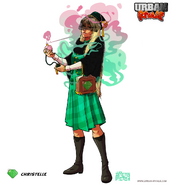 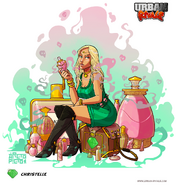 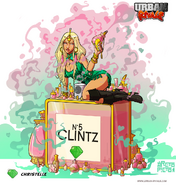 Extra art by designer
Add a photo to this gallery
Retrieved from "https://urban-rivals.fandom.com/wiki/Christelle?oldid=54423"
Community content is available under CC-BY-SA unless otherwise noted.