RIP Dakota, who’d abandoned his tribe and his dignity for the white man’s firewater. One evening, while drinking and gambling, he lost not only his last penny but also his life when he choked after being covered in tar and feathers by a crazed crowd. 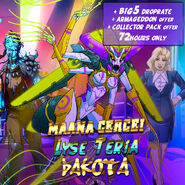 Collector Announcement
Add a photo to this gallery

Retrieved from "https://urban-rivals.fandom.com/wiki/Dakota_Cr?oldid=71743"
Community content is available under CC-BY-SA unless otherwise noted.