In life, what matters most is to find one’s true calling. Dallas started off doing traditional weight throwing but even though he threw heavier and heavier missiles, he was never really satisfied. But then one day, something clicked and ever since he's been throwing the heaviest and most improbable objects he can find, which makes him an extremely useful weapon in the All Stars' fights! 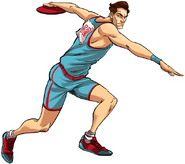 Retrieved from "https://urban-rivals.fandom.com/wiki/Dallas?oldid=62017"
Community content is available under CC-BY-SA unless otherwise noted.