Djengo was one of the best agents when it comes to cleaning up emerging organizations that see it fit to throw a spanner in the works of the GHEIST. During his last mission, Djengo had to confront a raging Walker in a duel that left him in very poor shape. So much so that Mini Mund deemed his agent worth nothing but Wurmhol food and tossed him over to Vryer who made the most of the soldier by testing a new type of fusion involving a XU sample. The XU brain, turning out to be far more imaginative that its previous owner, parasitized its host as a means to mould an indestructible armour that would reduce to a pulp every single head put a price on by the GHEIST! 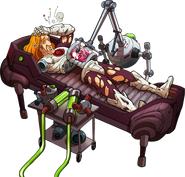 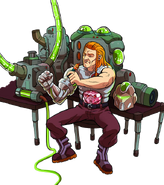 Level 4
Add a photo to this gallery
Retrieved from "https://urban-rivals.fandom.com/wiki/Djengo?oldid=67546"
Community content is available under CC-BY-SA unless otherwise noted.