Dobbs has spent his life designing revolutionary telephones! But at the time, no one believed in the interplanetary phone, apart from the visionary, Guru Phytoplanctonian. So, in the end it was the Sakrohm who financed his research, in exchange for product exclusivity. We are now proud to present the Sakphone 24G. It’s a revolution! 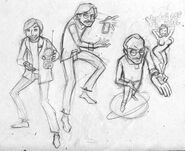 Dobbs in Arcade mode
Add a photo to this gallery
Retrieved from "https://urban-rivals.fandom.com/wiki/Dobbs_Ld?oldid=58079"
Community content is available under CC-BY-SA unless otherwise noted.