Many years ago, Elektrozova was a prosperous city, ruled by the Yakuza family, known as the Red Dragon. On the death of her husband, Dokuja Ld became the Onna Oyabun - head of the family - and decided to extend their business of extortion, blackmailing, drugs and prostitution to the surrounding cities. Her influence even reached as far as Clint City and it is said that the Fang Pi Clang trained a great many of their recruits... Many years have since passed and Elektrozova is now in ruins. Its organization has been almost totally destroyed and Dokuja Ld is now an old woman in the final grips of a terminal illness. But her fate could soon change: thanks to her information network, she has witnessed the return and fall of Nega D Ld in the Virtual World. And her me the new architect of this virtual world.  The promise of becoming immortal, invincible, and getting back into her old business and family affairs in a new city seems like a golden opportunity that is just crying out for a new Leader! So, Dokuja Ld has transferred her spirit to the virtual world… But just what will happen when she finally gets her hands on that artifact? 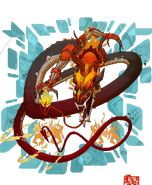 Level 4 Arctopicto Promo
Add a photo to this gallery
Retrieved from "https://urban-rivals.fandom.com/wiki/Dokuja_Ld?oldid=69925"
Community content is available under CC-BY-SA unless otherwise noted.