In the future, with Dregn having captured most of the Jungo to serve as fodder for his experiments, Easter's only chance of survival was to first track down and then join the resistance so as to transfer his spirit into an artificial casing. Having previously been an explosives expert, thanks to Hive technology he has now become a master of the timed energy bomb... But like all artists, he's never on time! 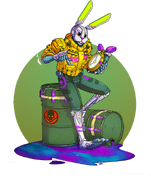 Level 4
Add a photo to this gallery
Retrieved from "https://urban-rivals.fandom.com/wiki/Easter?oldid=67377"
Community content is available under CC-BY-SA unless otherwise noted.