Don’s little cousin, Edd, is known throughout town as the black market expert. Whatever you’re after, if it exists, he’ll sell it to you, and if it doesn't exist, he'll sell it to you anyway, but at a higher price. But be warned, if you don’t have any cash on you, you might just walk away with one less kneecap.

Edd appears in his third level form, and for a while, only made minor speaking cameos and told Zlatar off when he tried to extort money from them in return that their new police bots will ease off on him. He had a much bigger role and an attempt to show his romantic side in "Montana Day Afternoon" where after a spat with his wife, Sharon, he had hired Enzo to pick up a fancy necklace and closed down the restaurant part of Borgia's so they could have romantic dinner. 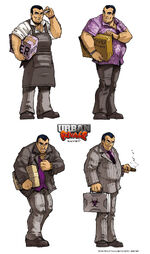 Retrieved from "https://urban-rivals.fandom.com/wiki/Edd_Cr?oldid=65996"
Community content is available under CC-BY-SA unless otherwise noted.