At the heart of Los Santos, the city of Calisco boasts local traditional bands, abundantly colourful with their guitars, trumpets and violins. Bernardo had more than the requisite amount of talent for his job as a musician. For instance, his unrivalled footwork had made him an invaluable asset for the revolutionaries resisting the dictatorship. With the peace restored, Bernardo "El Mariachi", along with Mercurio, now provides the exhibition matches at the top of the Pile Tower with musical ambience. Most notable are his beautiful renditions of "Cielito Lindo" on the violin, while he simultaneously goes for a leglock that leaves his opponent paralysed and humiliated! 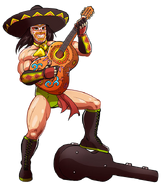 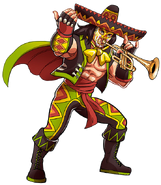 All levels
Add a photo to this gallery
Retrieved from "https://urban-rivals.fandom.com/wiki/El_Mariachi?oldid=68734"
Community content is available under CC-BY-SA unless otherwise noted.