Having been around in Clint City since anyone can remember, the Freaks Circus offers unbelievable daytime shows for you and your kids, including fire breathers, knife throwers, big cats and magicians! But when night falls, the show turns into something quite different which, let’s just say, is not recommended for the weak at heart… Come see the Freaks; you're in for a big surprise!!!

The Freaks were released on April 2007. 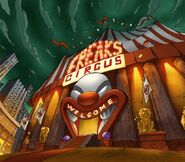 Retrieved from "https://urban-rivals.fandom.com/wiki/Freaks?oldid=72104"
Community content is available under CC-BY-SA unless otherwise noted.