Faster than any delivery van and certainly more reliable than the subway, Garrik knows the city and its backstreets like the back of his hand. So if you've got an express delivery to send, look no further - Garrik's your man! But be warned, he's not so great with fragile objects… 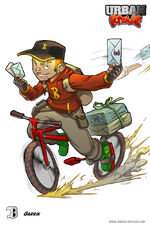 Retrieved from "https://urban-rivals.fandom.com/wiki/Garrik?oldid=60155"
Community content is available under CC-BY-SA unless otherwise noted.