A former beauty, Gina Glitt spent her youth at Uppers' parties. Obsessed by her fear of aging, Gina keeps up looks with the marvels of modern medicine. When she's with other Uppers, she never misses an opportunity to beat up a few vile representatives of the lower classes "just to keep in shape". 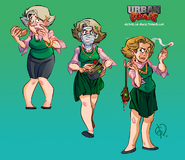 All levels (Redesign)
Add a photo to this gallery
Retrieved from "https://urban-rivals.fandom.com/wiki/Gina_Glitt?oldid=70319"
Community content is available under CC-BY-SA unless otherwise noted.