There just isn't room in Clint City for two idols of the crowds. Or at least that's what Sigmund Cr thinks, feeling that DJ Korr Cr has been putting him in the shade for far too long now!! So with his four extra arms and nuclear exoskeleton in reinforced Sigmetallum, Gork is the perfect agent to eliminate the insufferable Junkz member!

He has a small role in 50 Shades of GHEIST in his fourth level form where he, Methane and Ludmilla start a fight at the Hellfire Club to draw in Lois Ld, Once she takes the bait, they bring in their latest member, ARN 2000, who starts thrashing her until Vixen Cr cuts the source of ARN 2000's power and the two Pussycats make short work of the other GHEIST members. 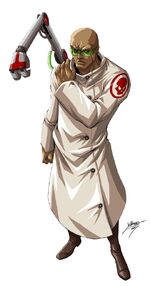 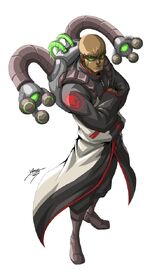 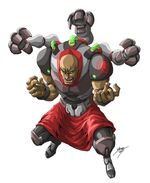 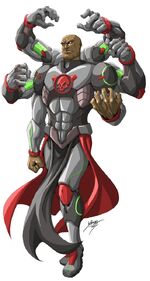 Retrieved from "https://urban-rivals.fandom.com/wiki/Gork?oldid=66027"
Community content is available under CC-BY-SA unless otherwise noted.