Hans only had to say one thing to Eyrton to convince him that fidget spinning was a real sport: "Fancy my girlfriend Saki paying you a little visit?" 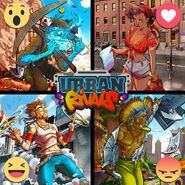 Retrieved from "https://urban-rivals.fandom.com/wiki/Hans_Spinner?oldid=59851"
Community content is available under CC-BY-SA unless otherwise noted.