Kind Hector isn't the violent sort. He was put in prison for a simple scam. He used to pass off cleverly disguised alley cats as extremely rare blue cats from the Isles of Melkozu to wealthy suckers. Only the sucker in question was Nellie… He was then tracked down by bounty hunters and tried and sentenced to twenty years behind bars: a punishment in keeping with princess Nellie's social standing. When he ended up in the Lost World, Hector survived by eating eggs he found in nests before realizing that this was a real treasure just waiting to be sold on. So he struck a deal with Jason who allowed him to come and go at his leisure delivering freshly hatched eggs to Clint City. He was then back in business selling "authentic baby dragons from the Ohéohé Islands". Well yes, once a crook always a crook! 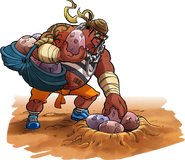 Level 2
Add a photo to this gallery
Retrieved from "https://urban-rivals.fandom.com/wiki/Hector?oldid=67633"
Community content is available under CC-BY-SA unless otherwise noted.