The rigging of the “Stärkste Frau von Balgenheim” contest had always left Hindelga feeling deeply dissatisfied. So after undergoing a tough training program in the high mountain pastures, she turned up at the Freaks' circus to challenge Olga once more and this time round, lay claim to true victory. However, after their Herculean arm wrestle had been going on for more than five hours, Boris stepped in saying that if a duel was what they wanted, they may as well do it in the ring! 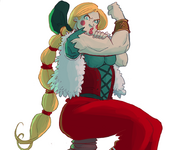 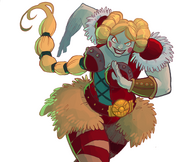 Concept sketches
Add a photo to this gallery

Hindelga is a white skin woman , with long blonde hairs collected in a braid . In the first and second level, Hindelga wears a traditional German dress. She hugs a sheep under his right arm, while in the left he holds a  picnic basket, full of something we don't know, because a red and white blanket covers the basket. Her dress is composed of a turquoise dress, a red skirt and a bodice that tightens her waist just below the breast. Also in the third level she wears the same dress, while she is intent on showing the muscles of her arms. She is wearing a bracelet on her right arm, she is also sitting on a milk tank that she is intent on crushing with her weight. This is a reference to Olga, who in the first and second level raises and drags some milk tanks. In the fourth level she still wears the bodice, but also an armor. Her hair is slightly different. It is also possible to see a golden belt composed of the symbol of the Freaks clan, the head of a Clown. She doesn't  wear any skirt and shows off his legs while he seems to be running. She still wears the bracelet, but not on the right arm, but on the left.On the last level, Hindelga wears what looks like a woolen skirt, with leg warmers on the legs, and the same armor as the previous level, the same belt with the clown's head, but also a helmet, from whose sides blue feathers rise. . She wears red shoes, different from the hooves she wore on the first two levels. She really looks like a warrior, and shows all her strength by lifting an elephant. Hindelga does not care much about his femininity, in fact it can be seen that the hairs under his armpits are not shaved, and sprout like two flakes. Despite this she has two big pink cheeks on all levels, who looks like makeup.

Retrieved from "https://urban-rivals.fandom.com/wiki/Hindelga?oldid=69075"
Community content is available under CC-BY-SA unless otherwise noted.