Having only just arrived in town, Hula and her sister Twyh were taken on by Betty who opened the doors of the Pink Club to them, but after a dozen or so shows the two sisters were spotted by Eve who convinced Boris to hire them. Ever since, Betty has sworn to get her revenge on the Freaks and in particular on the two sisters. 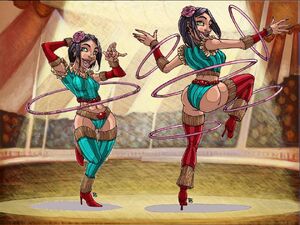 Retrieved from "https://urban-rivals.fandom.com/wiki/Hula?oldid=61047"
Community content is available under CC-BY-SA unless otherwise noted.