Khabbas, more commonly known as "IronJaw", is proud of his achievement. After ten years in prison for robbery, he agreed to pay a handsome ransom to win back Bloodh's favor. The pirate with the iron jaw was able to regain his place alongside his captain… Without realizing that it required more than several million Clintz to win the clemency of the terrible Bloodh. His punishments are quite perverse, the sort of punishments that become more amusing with repetition. Yes, that's right! He has condemned IronJaw to the same fate as his brother Ahkab Cr: a metamorphosis by the coral symbiote of the Melkozu Islands.

He appears in "The Reunion", where he is at his former boss's new tavern where he gets into a bar fight, and even punches Dregn Cr in the face.

Level 4
Add a photo to this gallery 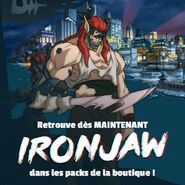 Level 4
Add a photo to this gallery
Retrieved from "https://urban-rivals.fandom.com/wiki/IronJaw?oldid=71153"
Community content is available under CC-BY-SA unless otherwise noted.