Defeat: Recover 2 Pillz Out Of 3

The Vortex are not always at war! Sometimes they need to rest, celebrate their victories and design new weapons. That’s why the Negotiator’s role is essential and is also highly lucrative of course. Izsobahd vowed that one day he’d become Kha'alif, the supreme Negotiator, instead of the Kha'alif... 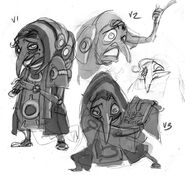 Concept sketches
Add a photo to this gallery

Retrieved from "https://urban-rivals.fandom.com/wiki/Izsobahd?oldid=52998"
Community content is available under CC-BY-SA unless otherwise noted.