Having mutated as a result of the supernatural ash left behind by Griffonmor when he awoke in the volcano, Jakobs is now a whole lot more than just a simple lizard. Apart from the fact that he can withstand extreme levels of fire and heat, he is now able to breath fire like a dragon hunting its prey. And now, with even the animals of the island starting to chargrill their meals, who knows what’s going to happen next?! 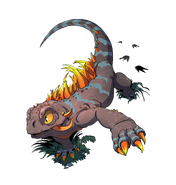 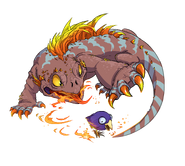 New Blood Banner
Add a photo to this gallery
Retrieved from "https://urban-rivals.fandom.com/wiki/Jakobs?oldid=70687"
Community content is available under CC-BY-SA unless otherwise noted.