As a smuggler of all manner of merchandise, Jason was finally stopped at the Poldachie-Golgovine border with a cargo of dodgy looking candy from the Nightmare manor that put him behind bars for quite some time. The airplane crash then left Jason face to face with some not very friendly local creatures not to mention his fellow prisoners. However, remembering the time he'd trained seals to help him smuggle cigars out of Los Santos, Jason quickly realized that triceratops are the perfect animals to help him secure his place after Rex Sweig seized power. His idea is simple: to first transport everything he possibly can to Clint City. And then, so as to allow as many Raptors as possible into Clint City, to take on the role of supplying the remaining members with equipment and bringing back material from the lost world to sell to the highest bidding fool. 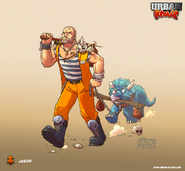 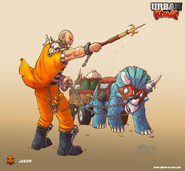 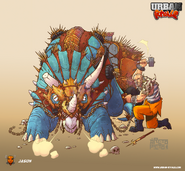 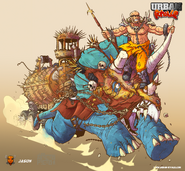 Level 5
Add a photo to this gallery
Retrieved from "https://urban-rivals.fandom.com/wiki/Jason?oldid=52174"
Community content is available under CC-BY-SA unless otherwise noted.