As a reliable yet quick-tempered goal keeper, Kang's football team decide to get rid of him as his fits of anger are starting to scare his own defenders. Tired of stopping balls, he reinvents himself as a shot putter. Throwing a ball as far as he can could very well be the making of him... 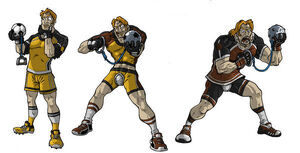 Retrieved from "https://urban-rivals.fandom.com/wiki/Kang?oldid=59870"
Community content is available under CC-BY-SA unless otherwise noted.