No sooner did they arrive than Katan paid a little visit to the Freaks in order to challenge Vassili, her sole rival in the art of knife-throwing. The challenge lasted four days during which Boris filled his pockets, while the Piranas set about picking those of the spectators. It still hasn't been decided who’s the best, but one thing’s for sure and that is that they're both very, very dangerous! 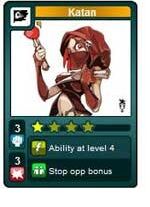 Level 4
Add a photo to this gallery
Retrieved from "https://urban-rivals.fandom.com/wiki/Katan?oldid=51830"
Community content is available under CC-BY-SA unless otherwise noted.