One evening, quite by chance, Kerry found herself caught up in the midst of a battle between the Freaks and the Roots and received a knife, thrown by Vassili, in her leg. This brought it home to her that the situation was totally out-of-control and so she decided to mobilize the crème de la crème and come to the rescue of the residents of Clint City. 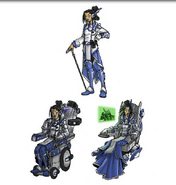 Retrieved from "https://urban-rivals.fandom.com/wiki/Kerry_Cr?oldid=63726"
Community content is available under CC-BY-SA unless otherwise noted.