After having experienced fame at the age of 16 as a member of the group “The Big Sausages” with their hit single “I Love Sauerkraut”, Polo soon realized it was going to be hard to stage a comeback in the world of rap unless he changed his name and disguised his face....

This card hasn't appeared in a [web comic] yet. 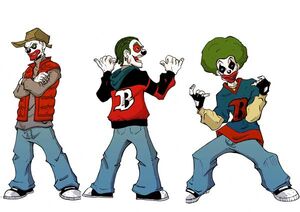