It was on a supermarket building site in the east of Clint City that a very strange egg was found. In the utmost secrecy, Ielena retrieved it and hatched from it a gigantic monster capable of destroying anything that crosses its path. The enemies of the Nightmare Clan had just better behave themselves!

Kolos is mainly portrayed as a gigantic, Godzilla-like force that was trashing Clint City when he finally broke out of his egg. While it is never mentioned why Vryer (who helped create him) was helping Nightmare create such a creature, but it took the combined efforts of Sentinel, Ulu Watu, La Junta and the Pussycats to break Nightmare's hold over Kolos and send him into the jungle near the city. Kolos' current condition is unknown.

"Kolos the Lost World" shows a softer side of Kolos when he tells his own kiddie version of his past to his son, Rage. In his story, he was found by Ielena and raised among the Nightmare until he was old enough to go to the school. Bullied by the story's version of Stanford, Ongh Cr and Lost Hog Cr, he fought back and embraced a newer, tougher image. As he grew-up, he would do his best to fit the clan's desire for him to be a scary monster until he scared Gum enough to make him cry. Realizing that being a mean monster wasn't in his nature, he left for The Lost World where he had Rage on his own (he's a hermaphrodite). At the end of the story, he let Rage go out to play, happy with the path his son was taking.

"Mechakolos Cr had his internal circuits shot to pieces with the fearsome Pandemos Cr making short work of him.

But the gargoyle was certainly up against it when Kolos leapt at his throat! Apparently, the charismatic Nightmare dino managed to inflict one last blow before succumbing to his injuries and giving Pandemos Cr the chance to pick himself up off the floor...

The Nightmare clan is in mourning today, as is the whole city... He was quite a symbol and this marks a page-turning moment with the city more and more out of control, on the brink of implosion between ever-stronger dimensional breaches and a dark force that is more and more palpable... The mighty Kolos is no more and the old dinosaur is now at rest in the Manor's cemetery!

As for the GHEIST, they've already got to work on a new mecha... The clan is trying to negotiate a partnership with the specialists in arms of mass destruction: La Junta!

The fight made the ground tremble and had the whole of Clint City watching on with bated breath... But Pandemos Cr is the out and out winner.

Enigma watched on as his beast foundered and then rose up to deliver one last killer blow to his monstrous opponents!

The center piece of his collection is injured. He's going to make them pay for this! The Paradox funeral god is confident: he is going to embalm the entire city and Memento's alliance won't be able to stop him. Get ready for a bloody wave of new clashes…" 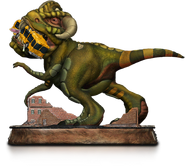 Travis Ld fighting Kolos
Add a photo to this gallery

Retrieved from "https://urban-rivals.fandom.com/wiki/Kolos_Mt?oldid=70473"
Community content is available under CC-BY-SA unless otherwise noted.