On Lois Ld's planet, the women are in charge and peace and harmony reign. So imagine her surprise to discover an Earth ruled by machismo and testosterone! So, she’s decided to join the Pussycats and acting under the guise of Wonder Kitty, use her powers to fight sexism within the government and other clans.

Lois appears in the first half of 50 Shades of GHEIST where they decide to try their newest weapon, ARN 2000, on her (given that she's been a thorn in GHEIST and a secret organization's side). Using a fight at the Hellfire Club to lure her in, ARN 2000 is able to dampen her powers and thrash her until Vixen comes in and cuts the source of his abilities. With his out of commission, the two of them are able to defeat the rest of the attackers and make them retreat. 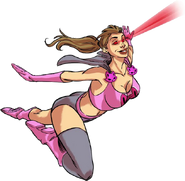 ARN 2000 punches Lois when Vixen rushes to her aid

Lois and Vixen take down the GHEIST
Add a photo to this gallery
Retrieved from "https://urban-rivals.fandom.com/wiki/Lois_Ld?oldid=67783"
Community content is available under CC-BY-SA unless otherwise noted.