Bouncer at the Pink Club, Louise is always the first to step forward when the clan is in need of a hand. Whether it's to stand guard on a secret meeting, sort out a macho repeat offender or to ensure a good atmosphere at a fancy dress party.

LV 5.
Add a photo to this gallery 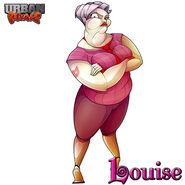 LV 5.
Add a photo to this gallery

Retrieved from "https://urban-rivals.fandom.com/wiki/Louise?oldid=64436"
Community content is available under CC-BY-SA unless otherwise noted.