After an intensive course with La Junta, Lucy has come to the conclusion that shot-guns may be cool but war is a messy business and from a fashion point of view, the soldiers’ uniforms are really uncool. So she's joined the Pussycats and has played an active part in creating the Pink Commandos and designing their uniforms and weaponry.

LV 2.
Add a photo to this gallery 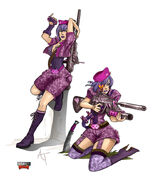 Training mode
Add a photo to this gallery
Retrieved from "https://urban-rivals.fandom.com/wiki/Lucy?oldid=51902"
Community content is available under CC-BY-SA unless otherwise noted.