Marlin has always dreamed of exploring the ocean depths and its sea life. So, he made himself a diving suit to descend into the underground sea and reach the ocean by a tunnel connecting the two. However, just recently, his wonder has given way to concern: his new friends, the marine creatures, are a lot more difficult to find than they used to be, as if they were hiding from something much bigger... 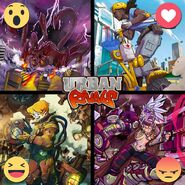 Facebook Banner
Add a photo to this gallery
Retrieved from "https://urban-rivals.fandom.com/wiki/Marlin?oldid=60419"
Community content is available under CC-BY-SA unless otherwise noted.