When you're born super-rich, life can be such a bore… but McLayton has a cunning way to keep boredom at bay: hunting! Thanks to unlimited funds, the body of an athlete and unrivaled ferocity, his collection of stuffed animals puts even Van Heckton to shame. McLayton has recently moved to Clint City from Poldachie Golgovine and has quickly realized that the city is full of interesting prey that might just offer him the challenge he's been looking for: dinosaurs, aliens… and the Jungos! 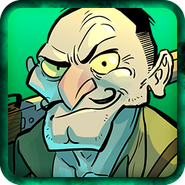