As a child of the city's rooftops, Maxine had to learn to steal very young in order to survive... And as she grew up, she made a real name for herself, ending up with her face plastered all over the city on wanted posters. As a result, it became harder and harder for Maxine to remain hidden or go unrecognized. Constantly on the run, she owes her ultimate survival to Charlie Cr and the Pussycats who offered her refuge, a family, and an alternative identity. And since meeting them, she's continued to steal but she now goes by the name of Meow. 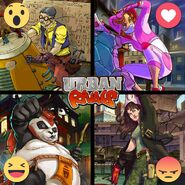 Facebook Banner
Add a photo to this gallery
Retrieved from "https://urban-rivals.fandom.com/wiki/Meow?oldid=71573"
Community content is available under CC-BY-SA unless otherwise noted.