Her punchline that won over the Pussycats: "Women are just like all the other men." Micciui hits back hard when you wind her up, with the added option of a "rifle butt beating". Working the door at the Double X disco-bar on the weekend, this towering brute has just two weaknesses: Candy Jack's sweeties and she goes weak at the knees for the now legendary Dudley. 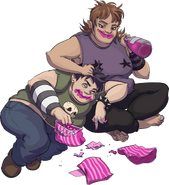 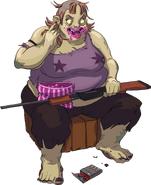 Level 4
Add a photo to this gallery
Retrieved from "https://urban-rivals.fandom.com/wiki/Micciui?oldid=70846"
Community content is available under CC-BY-SA unless otherwise noted.