The pranksters who entered Nova in the Miss Clint City beauty contest were more surprised than anybody at the gala evening of the celebrated event. Not having been particularly impressed by this attempt to ridicule her, Nova decided to stand tall and not chicken out when it came to parading on stage with her fellow contestants. And it has to be said the outcome of the jury's deliberations was far from expected, although it may have had something to do with the delicious sugary appetizers being served up behind the scenes. Whatever the reason, this slap in the face to Clint City's appearance-based society has gone down in history as a massive victory for the Roots! 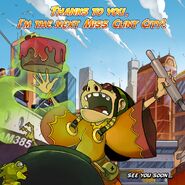 Game background when the card was released.
Add a photo to this gallery
Retrieved from "https://urban-rivals.fandom.com/wiki/Miss_Nova?oldid=68219"
Community content is available under CC-BY-SA unless otherwise noted.