Morrigan, with many others, was knocked out and kidnapped by the Nightmare clan during the Halloween celebrations. She then awoke in a blood-filled stadium, with a bludgeon by her side and a horde of zombies heading straight for her. But unlike most of the others there, Morrigan didn't panic. Grabbing all the weapons she could get her hands on, she forced her way through the horde, attracting fans and sponsors, and finishing in pole position with Strigoi! Her spectacular victory will surely earn her Eyrton's attention… 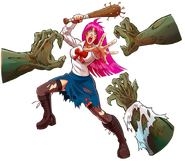 Retrieved from "https://urban-rivals.fandom.com/wiki/Morrigan?oldid=68775"
Community content is available under CC-BY-SA unless otherwise noted.