Like any other city, Clint City has its fair share of demons, vampires and other supernatural beings. Founded by Ielena, the Nightmare Clan's sole purpose is to give power to these creatures of the night.

Nightmare were released on June 2006. 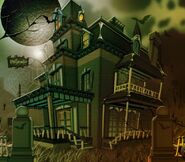