After several days of intense fighting, the Golden Throne final between El Divino and Quetzal was just about to start when Noctezumama appeared in the ring... "Stop fighting! Where's my son gone?!" Then to everyone's amazement, Noctezumama started whacking them both with a rolling pin, and of course, they couldn't retaliate. You can't hit a mom! Not ever! So, here's hoping she doesn't hang around too long. 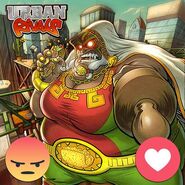 Special booster pack "Where's my boy" available only for 24 hours

Second booster pack promo
Add a photo to this gallery
Retrieved from "https://urban-rivals.fandom.com/wiki/Noctezumama?oldid=66966"
Community content is available under CC-BY-SA unless otherwise noted.